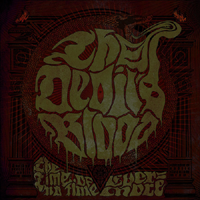 Blast you, European releases. Initially released last fall, The Time of No Time Evermore will unfortunately not be a part of this scribe’s Top 10 for 2010, which is a crime – it’s that good. A refreshing blast against what is currently happening in the underground, The Devil’s Blood parlay Satanic psychedelic rock into a shimmering, no-filler offering that as far as full-length debuts go, is nearly unbeatable.

Stripped down to its core, The Devil’s Blood provide an exercise in simplistic songwriting that proves you don’t need a flurry of notes to get one’s point across. In fact, there are probably more notes in a single Brain Drill or Veil of Maya song than there is on this entire album (and yes, we hate to reference bands like that when discussing an album of such magnitude). Plus, there’s an endless cascade of moods, from bouncy rock (“I’ll Be Your Ghost”), eerie, atmospheric outlets (“House of 10,000 Voices”) to flashy, Thin Lizzy-happy guitar bursts (“Queen of My Burning Heart”).

Duelling male/female vocals courtesy of SL and TDB (the band operates under a thick veil of secrecy) only add to the haunting vibe of this thing. There’s this Levay/Coven aura across the board; we can almost imagine the band hunkered down in some type of Satanic ritual while writing the album. And since the album is so entrenched in Satanism, it becomes even more bothersome, as the unsettling, yet melodic 4/4 romp of “The Yonder Beckons” (love the twin guitar harmonies) and “Angel’s Prayer” make their way through.

The band clearly have down their homework, as there’s a nary misstep, nary a contrived moment on The Time of No Time Evermore. It’s a direct throwback to 70’s rock and proto-metal that is so well-written and fine-tuned, that one can’t help but get onboard. The Devil’s Blood were already onto something with their marvelous Come, Reap EP from 2008 (yep, we dug it big-time) and this well outpaces it. Simply mesmerizing; one of the true-must haves for this year.