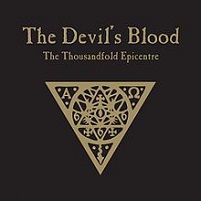 Rare when a band actually tweaks us out while listening to them. Meaning, nothing prompts Blistering to feel uneasy or uncomfortable during an album spin, being that no amount of devil-humping, gore and guts, or lurid allegory will cause us to lose any sleep, but there’s something hauntingly charming about The Devil’s Blood. Maybe it’s because they’re Satanic without the comedic aspect, with a female singer (F/TBD/MOS) who casts 70’s proto-metal spells like the most evil of witches. It somehow all adds up effortlessly, and on the band’s second full-length The Thousandfold Epicenter, the results are majestic.

Right in line with 2009’s excellent The Time of No Time Evermore, The Thousanfold Epicenter retains many of its predecessor’s production qualities. The thing sounds righteously ingrained in the 70’s, with natural tones and sounds. In addition, the harmonic layering done on F/TBD/MOS’s vocals is reminiscent of Heart (yes, that Heart) when they were at their most rocking and mysterious, as heard on album highlight “Within the Charnel House of Love,” which could very be the band’s best song to date.

Elsewhere, the pure rock boogie of “Cruel Lover” is totally infectious (check out the disco section at the 4:04 mark…where’s Satan’s Studio 54?), “She” blends in riff-rock harmonies and more alluring vocal tactics, while the epic title track takes the band’s through the caverns of classic rock and back. The album hits a morose note with “Everlasting Saturnalia,” a fitting cutaway that relishes in the band’s simply desolate atmosphere.

Hardly the sideshow that Ghost is (who are still formidable in their own right), The Devil’s Blood are entity onto themselves, and could very well be considered metal’s most valid Satanic band. The songs from The Thousanfold Epicenterwill stick in your craw, that is a given. Whether they’ll haunt your dreams is entirely another thing, but don’t be surprised if they do.