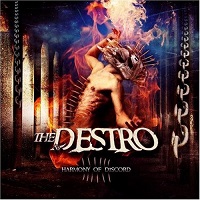 The Pantera ship has sailed long ago, unless you’re Throwdown or the band in question, The Destro. On one hand, the band’s simplistic and punch-in-the-gut tactics are a welcome respite from most of the underground’s relentless pyrotechnics, but over the course of nine songs

, there’s just no way Harmony of Discord can stand on its own two feet.

The main issue lies with the banal riffing, which from song to song, is a virtual re-write of itself. It starts with “Justifiers of Malice,” a punchy number in its own right, utilizing crunchy, no-frills guitar-action which are fine and good…but only in the context of maybe one or two songs. Without any hooks, guitar solos or melody, The Destro hits the bottom of the idea barrel pretty quickly.

Some of the mosh-ready portions (check out the beginning of “Mouth of the Heretic” and “Dead Eyes Divine”) have some gusto to them, definitely, although you have to wade through the monotonous vocals and overall bland-age to get to anything of value. Good thing most of these songs are short or The Destro would be in serious trouble.

There are no qualms with purveying the groove-happy style that Pantera popularized in the 90’s and Throwdown continually apes to this very day, but if you’re a band like The Destro and you’re continually swimming upstream, some routine upkeep in the diversity and hooks department would be a well-advised move. For now, we’re totally checked out on this style and obviously, this band.