The Desolate – The Great Departure (Self-Released) 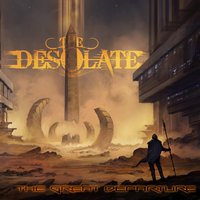 Melodic death/thrash, particularly from the North American standpoint, is one that is hard to break free of the mold. Most bands seem to follow the same basic pathway – equal parts Scandinavian worship and a little bit of Lamb of God/Shadows Fall/etc on the homefront. While The Desolate don’t entirely distance themselves from this angle, The Great Departure will keep your interest without fail.

The Great Departure takes one thing above all else, and thankfully that is the riffs. From beginning to end, intense yet memorable riffing guides the way. From speedy gallops (“Cosmic Meat Cleaver”) to mid-tempo bangers (“I Have No Name”) to breakneck thrash (“Sentinel”), The Desolate aim to please with an abundance of melodies that are sure to whip you up into a frenzy. As mentioned in the introduction, there’s a bit of European flavor to the melodies, as well as a more Americanized, slightly technical approach to keep things from feeling too close to either ends. Then there’s the aggression of what the early metalcore scene provided (at the more metallic end of it anyways) to filter a bit more heavy into the equation. Some of this added weight also comes from the vocal aspect, which keeps to a more brutal delivery, more in line with bands like Dew Scented.

The Desolate doesn’t bring a ton of innovation to the table, but it does comes chock full of hard-hitting riffs meant to hit your sweet spot. Hard to argue with an album like this, particularly with the sheer quantity of moments that stick with you long after the final track stops playing.