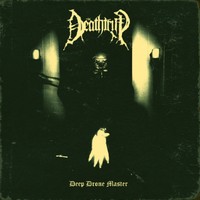 Aiming to create what they call a “raw-as-can-be ‘production’,” The Deathtrip attempts to revive and modify the sound of early 90’s death metal by mixing low throaty vocals, battering drums, semi-dull bass and blaring guitars constantly grinding like a chainsaw in fast-paced riffs or sluggishly droning in heavy darkened tones in these moderately monotonous tunes. The Deathtrip define their music by their name – a trip into death metal laced with black and drone influences. It’s not the best but it’s decent for what it is. Copy, paste and edit work, to say the least.

Basically, vocalist Aldahn’s goal was to take the essence of his music with Dødheimsgard and raise it to a new level by bringing life unto a new beast, one that is both more mesmeric and primitive. Though they’ve used a drum machine in the past, we’re delighted to hear that Dan “Storm” Mullins took on the drums for the band’s first full-length, which makes these songs at least one degree livelier than the demos. Sometimes the vocals come out rather weak, as in “Flag of Betrayal” and “Dynamic Underworld,” but the voice seems to strengthen here and there throughout the album. “Cocoons,” for example, is one of the better songs on the album with its rough vocal verses and killer instrumental composition. “Something Growing in the Trees” has a great groove and a fascinating lyrical theme of forest fantasy. The poetic quality of the lyrics is certainly one of their greatest assets.

Alas, over half of these songs have been previously written and released and that’s one thing we can shake our heads at, so much for “new” material. On the other hand, the songs have been reworked and are significant improvements in comparison to the original versions. Still, they could’ve put more effort into doing something entirely different but maybe they simply wanted to go back and fix up those old messes of theirs. Regardless of what these old-time metallers continuously claim as a purpose, The Deathtrip resuscitated themselves as a band with Deep Drone Master more so than they did with the metal genre.