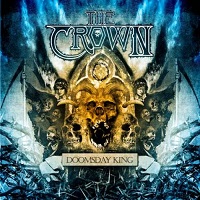 Hard to fuck with The Crown, you know? They ended things a bit too early in 2004 after years of slugging it away on the death metal club circuit, broke, destitute, and oft-overlooked. ‘Tis a crime, actually, for albums likeDeathrace King and their supposed 2003 swansong Possessed 13 are searing shards of brisk Swedish death/thrash. And while no one is going gonzo for their return ala Carcass and/or At the Gates, Doomsday King is the type of album that should sneak up on a lot of people.

Returning 4/5’s of its core line-up (singer Johan Lindstrand declined to take part and was replaced by God Macabre vocalist Jonas Stålhammar), The Crown revert back to their form on the aforementioned Deathrace King and 1999’s vicious Hell Is Here, all but eschewing the melodic bits and doomy portions that made Possessed 13 such a must-have. There’s nary a moment to slow down here; it’s swift, momentous, and arguably some of the band’s most brutal material to date, as referenced by the mid-section of “Angel of Death.” Obviously, the Swedes still don’t care who they lift songtitles from…

Stålhammar wisely keeps his vocals in line with Lindstrand’s, and on a handful of occassions sounds like his predecessor. So if anything, it produces a settling comfort zone that is apparent right off the bat during the opening title track, as well as “Soul Slasher.” The band does take down the tempo during some portions of “The Tempter and the Bible Black,” but for the most part, it’s (death) racing across the board, with massive chugs and drummer Janne Saarenpää’s always killer time-keeping. Dude is as underrated as they come.

Without a true “wow” moment on level with past stalwarts like “Rebel Angel,” “World Within” and “Deliverance,” Doomsday King does have a surprisingly degree of uniformity. Yet, in the end, The Crown have returned with a stormer of an album, one that should put the bed any existing concerns over whose fronting the band. Best of all, it will hopefully erase the foul taste of previous post-Crown acts like Angel Blake and Engel. Those were terrible. This is not.