The Convalescence – This is Hell (Unique Leader) 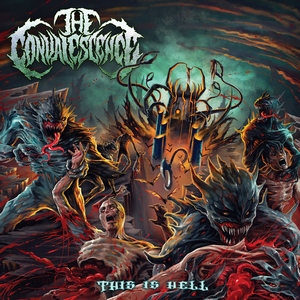 Not really appearing on this scribe’s radar prior to the recent controversy surrounding Otep giving them the boot from a tour run, The Convalescence have built themselves up with a few prior releases before signing to Unique Leader Records. A symphonic deathcore outfit, it’s an odd choice for the normally more deathly UL to sign, but does fit right in with the recent So This is Suffering release. Perhaps the label is trying to recapture the ‘youth’ demographic now that Rings of Saturn has moved on to Nuclear Blast.

Label motivations aside, the problem with This is Hell is how cliché-ridden it feels. There’s the usual chuggy riffing (complete with often momentum-killing breakdowns), disorienting electronic elements that feel more comfortable at a rave than a metal show, and last but not least, the standard barks and screams (don’t forget the occasional awkward spoken word here and there) with riveting content such as “Burn, burn, burn motherfucker – this is the end of us all.” Sure, lots of bands use derivative lyrical content, but in it’s a bit easier to take in if the surrounding musical output is stronger. The riffing is completely interchangeable with any other band of this ilk, and even the symphonic edge never really moves them away from more already clearly beaten-to-death paths. For what it’s worth, the one redeeming thing that does pop up in a few places are some clean vocals from keyboardist Katie McCrimmon, particularly on “I Won’t Survive.” It’s a departure from most deathcore (though She Must Burn comes to mind) and if they found a way to add more dynamic in the future with it without going completely ‘beauty and the beast,’ they could launch some potential if used more and used effectively.

Despite some attempts to differentiate themselves from the pack, it’s hard to listen to This is Hell and not think that it simply sounds like deathcore 101. They cover all the basics, but underutilize things that could truly let them break more fresh ground. But hey, the middle/high school deathcore crew will undoubtedly still eat it up, stale breakdowns and all.