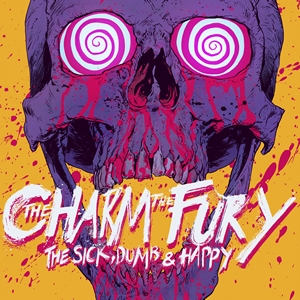 Dutch act The Charm The Fury made their mark on the world with an EP and album to their name before Nuclear Blast scooped them up for their second full-length, the upcoming The Sick, Dumb & Happy. While the dyed-in-the-wool metalheads may balk at the oh, so bright cover art, rest assured that this is one up-and-coming band that modern metal fans are going to gravitate towards.

One of the most impressive things about The Sick, Dumb & Happy is how it manages to continue to surprise you with the diversity in tracks yet retain a core sound to which the music is developed from. Things start off with the thrashy and groove-ridden “Down on the Ropes,” with an ear-catching thrashy gallop over Caroline Westendorp’s aggressive snarls. The thick groove then takes a different twist with the following track, “Echoes,” which morphs into a strong melodic chorus (and fun solo later on), additionally utilizing some thrash influence with a hint of ‘core on the side. An almost melodeath riffing defines the verses of “Weaponized,” with energetic “hey” shouts on top of some throttling tempos. The tempo relents for the first time with “Blood and Salt,” a darkly melodic track which sees Westendorp shifting more into cleans than shouts with atmosphere building behind her. “Silent War” builds upon this atmosphere later, as a mellow ballad that choses to avoid cliché-ridden and sappy territory and brings Westendorp’s impressive singing to the frontline. On the other hand, you have more hard-hitting tracks such as “The Future Need Us Not” and “The Hell in Me” to satisfy your need for groovy riffs as the album comes towards a close.

Ultimately, what puts The Charm The Fury on top is that The Sick, Dumb & Happy is an incredibly fun album to listen to. A cut like “Songs of Obscenity” has all of the groove and metallic crunch you want to hear, yet they combine it with a sing-a-long (which could easily include a fair amount of clapping in the live venue) vibe that you can’t help but smile when you hear. Whether it’s an aggressive groove, melodic riff, or catchy chorus – there’s a fresh and infectious feel that demands listener participation. And while you may be able to pick up on the band’s influences from time to time, it never diminishes the raw energy present. A surprisingly addictive album from a band that’s about to catch some major deserved buzz.