The Chant – This Is the World We Know (Full Metal Records) 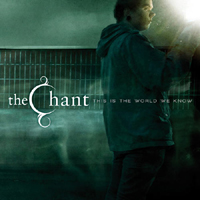 Awash with Paradise Lost/Katatonia melancholic splendor, Finland’s The Chant serve up one of those patented, shimmering Goth metal albums that while light in more places than one, carry a dense emotional weight that is hard to match. Don’t be swayed by the fledgling Full Metal Records endorsement – The Chant is barely metal, but who gives a flying you-know-what. This is can’t-miss stuff.

This Is the World We Know is the second effort from The Chant (and no, we haven’t heard the first album), and displays a keen sense of atmosphere, namely on the opening 1-2 punch of “New Reality” and “Reflected,” the latter of which is early contender for Song of the Year. No joke. “Reflected” is the type of forlorn, dreary outtake that PL would have dove head-first into during the transition period between Draconian Times and One Second, resulting in a lush, keyboard-driven number that has one of the more downtrodden choruses to date.

From there, The Chant fill up the album with more drears and tears (“The Black Ascension,” “Safe World”), both of which see vocalist Ilpo Paasela come to form via a wealth of hushed, poignant signing, that occasionally unravels into semi-harsh yelling. There are some semi-poppy, alt-rock moments that take away from this, most notably “November 1987,” “Will You Follow” and “Armored Man.” However, The Chant more than make up for this in other spots, particularly “Common Price.”

Devotees of the vaunted dark metal sound will no doubt reach for a band like The Chant, who in its infancy, appear to have an excellent grasp on what it takes to stick out. An album full of songs like “Reflected” and “New Reality” would turn these Finns into world-beaters. For now, This Is the World We Know will surely enable them to become one of Goth metal’s top up-and-comers.