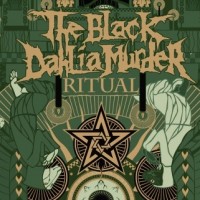 With the number of memorable songs on 2009’s Deflorate being less than one, Black Dahlia Murder have wised-up and gotten back to their roots on Ritual. The album carves things up with melodic splendor, all the while staying in tune with the band’s core death metal sound, and in essence, it tears Deflorate and even 2007’s Nocturnal a new one.

Lots of head-turning jams here, staring with opener “A Shrine To Madness,” which sees the re-introduction of melodic guitar lines in the chorus. Such moves bode well for BDM, for they’re usually swimming in a stream of break-neck riffing that links up with octopus-armed drummer Shannon Lucas. “Moonlight Equilibrium” is even more effective, with a spiky lead melody pushing the pile.

The heads-down death metal punch of “On Stirring Seas of Salted Blood” and “Conspiring With the Damned” reminds one of the band’s 2003 Unhallowedeffort. Singer Trevor Strand (he of endless onstage smiles) has a wealth of stirring moments on the aforementioned jams, as well as on “Den of the Picquerist,” where he busts out a cut-throat chorus line that is sure to evoke crowd participation. Album standout “Malenchanments of the Necropsphere” is “single” material, with a staccato rhythm bearing the brunt of the song’s weight, while album closer “Blood In the Ink” emerges as a rare moment of departure for BDM, with classic instrumentation embedded inside a blazing melodic death metal canvas.

Not necessarily a career-saving album (BDM is as popular as ever), Ritual could very well outpace Unhallowed and their 2005 breakout Miasma. It has a versatility to it that the band has yet to display until now, which give Strand and the rest of the BDM gang all the more reason to smile. And who says there’s no smiling in death metal?