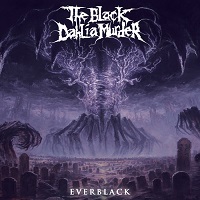 The release of Everblack gives pause to ten years ago when The Black Dahlia Murder were so fresh-faced, unproven, and green, that few gave them a fighting chance of survival. Dismissed because of their appearance and affinity for all things Carcass and At the Gates, the Michigan death metal troupe somehow managed to navigate some tricky years between their Unhallowed debut and Miasma follow-up…and before you know it, a decade has passed and the band are on their sixth album.

The predominant beef with TBDM has been how they’ve come to operate on a predictable album cycle, as in, their release schedule is to such a bi-annual T, that it detracts from their output. Small potatoes, frankly. If the band were putting an album out every year, surely the internet piss-brigade would be all over the band even more than they are now. As such, Everblack doesn’t quite have the melodic peel-and-burn of its Ritual predecessor, but is another tried-and-tested mélange of extreme death metal.

New drummer Alan Cassidy appears to be the right fit for the job, able to do the necessary kit-manhandling that predecessor Shannon Lucas was so prone to. And TBDM puts him to work on “In Hell is Where She Waits For Me,” “Control,” and “Every Rope A Noose,” a song that tests the limits of exactly how fast the band can go. Without the melodic shadings of Ritual, Everblack has to make due with Ryan Knight’s song-stealing solos and Trevor Strnad’s two-headed vocal approach, which tops off on “Raped in Hatred by Vines of Thorn” via the chorus.

Anyone who questions The Black Dahlia Murder’s relevance in the metal scene should check out one of their shows, for they are borderline adored by their fanbase. Maybe it’s because Strnad is always smiling, or the band has become the one-size-fits-all extreme metal band for Americans who don’t want to tread into deathcore territory, and don’t give a hoot about vintage death metal.