The Beast of Nod – Multiversal (Self-Released) 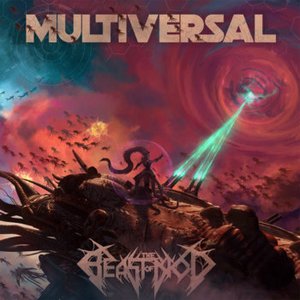 Massachusetts act The Beast of Nod introduces us to the term ‘intergalactic death metal’ and return with their second full-length offering. Many bands within the tech-death spectrum like to go for these space-y themes and content, but one has to give it to The Beast of Nod. They truly do sound otherworldly at times, which makes Multiversal a fascinating listen.

Jam-packed with the type of out of this world type of musicianship that you would expect, the promising aspect is in how The Beast of Nod puts everything together. They can provide massively impressive solos and leads (including a number of guests, such as Joe Satriani), but the atmosphere seems to take precedence over all else. And that atmosphere is what takes the band into the solar system in terms of their sound. In listening to the riffs and melodies (and light synth trimmings), they really set things into a distinct, space-y vibe. While the band no doubt sounds aggressive and frantic (see “The Latent Threat”), there’s a certain airy quality too it too, particularly when they slow down and really dig into the melodies. It makes an otherwise furious track feel more grandiose and epic, not to mention giving the listener something else to latch onto. Extended closer “Shredding of the Cosmos” conjures floaty melodies and leads while still taking care to kick up the momentum at the drop of a hat and provide the energetic shred that progressive/tech fans are looking for. Because it is more eloquently placed into each track, it ends up working in favor of the song instead of being simply a showcase for musical prowess.

Multiversal is loaded with strong musicianship and flair, but The Beast of Nod also grasp that you need to take the listener on a journey with the music and not just impress them. As such, this release should find appeal within the extreme community more at large, with its delicate balance of otherworldly atmosphere as well as copious amounts of shred.