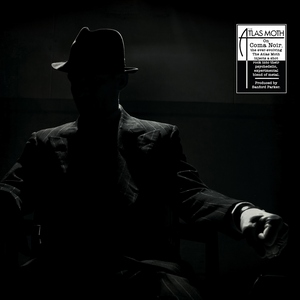 It’s been a few years since we’ve heard from the groovy and sludge-y post-metallers of The Atlas Moth. But when it comes to this particular type of material, they have remained one of the go-to acts, particularly after the excellent sophomore effort The Old Believers. Coma Noir continues to see them waving the atmospheric flag high enough for all to see.

If there’s one thing that’s kept The Atlas Moth at the head of the pack, it’s their ability to create some mammoth sized riffing and counter it with graceful atmosphere and plenty of quality melodies. That dense post-metal atmosphere is frequently permeated by some gorgeous leads and melodies (see “Galactic Brain” for a choice example) and it gives it an immediately palatable quality. In fact, it’s tough going to really pick out a track that doesn’t feature some sort of melodic highlight, from beginning to end, particularly with “Chloroform,” which manages to bring in the gloom as well as some crunchy riffing. Interestingly enough, it does feel heavier than previous releases, which aids in this particular contrast. There’s a renewed sense of urgency in the riffing structure, which is evident in cuts like “Actual Human Blood” and right from the get-go with the title track. Rounding out the band is the sense of both atmosphere and slight psychedelia, which songs like “Furious Gold” manage to hit in just the right amounts, reveling in both groovy and catchy guitar licks with a strong sense of atmosphere. Ultimately, while it stays in line with the band’s ethos, there’s always something to be on the lookout for.

Coma Noir sees The Atlas Moth continuing to perfect their formula while providing a fresh coat of musical paint. Sludge-y, groovy, and psychedelic in a harmonious ratio, there’s always something to pull you back towards another round with the album. Inviting yet snarling, The Atlas Moth are never at a loss for character.