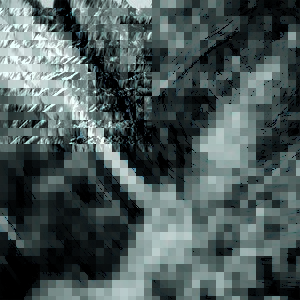 It’s been three years since Thantifaxath crawled out from their abyss and delivered a powerful debut in the form of Sacred White Noise. The Canadian act took black metal and added the same levels of dissonance to it, much akin to the way of Krallice and Deathspell Omega, but made it their own with a mystical energy and otherworldly nature that made it entirely captivating, despite the dense nature of the material. Void Masquerading as Matter is the next logical, and chilling, step in their evolution.

The level of mind-bending and horrific feellings have been upped since their debut, and it’s part of the reason for what works so well. The music is frequently discomforting – moving into almost soundtrack-like escapes when the dissonant black metal riffs die down. As strong and interesting as the more complex riffing is, when it combines with the escalating and claustrophobia-inducing synths and effects, such as in “Cursed Numbers,” it borders on horrific (in the best possible way). Yet beneath it all, some melody lurks. There’s enough there, despite the surrounding chaos, to keep you hooked. Intricate melodies lace the maddening aura just enough to keep you wanting. Piano and strings act as additional vessels for both sides of the melodic/haunting vibe, and heighten the sense. It’s a release that you aren’t really sure what’s coming next, and the sense of dread doesn’t dissipate after your initial listens. This is truly dark and oppressive material. The one thing drawing it back is the overly long title track that ends things – almost 8 minutes of choirs and dark ambience. Something that wears out its welcome long before it ends.

All in all, Void Masquerading as Matter shows that Thantifaxath has heightened their collective senses and brought forth something that’s terrifying, yet you won’t want to look away. A haunting, otherworldly release that truly takes you out of the moment and into a nightmarish setting that is equal parts decaying beauty and demented chaos.