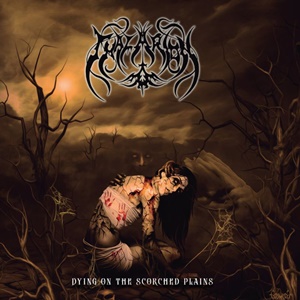 Slovakia is one of the smallest countries in central Europe: a mere shadow to neighbors like Poland, the Czech Republic, and the Ukraine. Which makes Thalarion special – an act from this territory making international inroads thanks to a vast career during the 1990’s/early 2000’s that includes five albums across the doom/death spectrum. Folding in 2006, members would move onto other bands (or writing romance/crime novels), finally returning to the scene for their sixth album Dying on the Scorched Plains. As a sextet, listeners can expect a style that continues to traverse the death/doom landscape, using multiple voices and versatility track to track that intertwine a duality of light and darkness people come to treasure.

You’ll get to hear driving rhythms, flashy drum work, and circular leads during a moving arrangement like “Space in Between” – then dark growls against female operatic melodies for the tranquil aspects of a doom-laden follow-up “Dead but Still in My Heart”. The guitar work possesses that measured thoughtfulness against brooding chord constructs – reaching deep to squeeze out the emotional components that tug at this music. When these musicians choose to get a bit uplifting and energetic midway through the record during “Wandering Minstrel”, the mixture of power/progressive and cultural aspects prove to be quite exhilarating, keeping your ears pinned for the shape shifting transitions, the background vocal ‘ahs and Big Country-esque guitar nuances ideal against the conventional Thalarion ways. Vocalist Petronela Hederova floats effortlessly between conventional rock/metal and operatic ranges – delivering goosebump melodies and harmonization that makes “Back to the Light” a second half favorite, the stunted electric/drum movements at times heightening the diversity of the arrangement. The keyboard use from Peter Dvorak doesn’t dominate the proceedings – properly gelling into the metal framework that Thalarion prefers to deliver on the title track plus the calmer, doom-oriented opener “Burning Pile”.

Bands like Tristania and Insomnium come to mind when taking in Dying on the Scorched Plains. It’s a record that has layers of passages to absorb, vocally and musically – the cohesion of heavy parts and tranquil passages making sense, the veterans capable of rising to the occasion even after a prolonged absence from the studio.