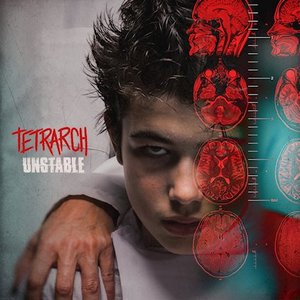 Coming in with some buzz from their debut with 2017’s Freak, Tetrarch make their sophomore effort now backed with Napalm Records. Championing a sound that holds its roots in nu metal might put the band on a slippery slope for some of the purists/diehards, but rest assured, Tetrarch manage to take the best elements of said sound and utilize them to craft an addictive modern metal experience.

Unstable lavishes itself in dark, heavy grooves that are strongly contrasted with some eerie melodies and very catchy hook-based choruses. While you can hear some call backs the nu metal era (think Slipknot, KoRn, or even Linkin Park), particularly in the usage of grooves, this is not a band content to rehash old material or simply generate nostalgia. The darkly dreamy melodies in songs like “Addicted” or “You Never Listen” emanate a more modern flair to them, and guitarist Diamond Rowe sprinkles in some intriguing solos in, upping the interest for those more on the metallic side of the line. This becomes more obvious in a raging track like “Negative Noise,” which barrels through with massive riffs and a strong chorus that never slows the momentum down, all the way to a fiery solo by Rowe. On the more melodic side of things, the grooves often roll into some soaring choruses (“I’m Not Right”) and equally potent hooks (“Sick of You”). The combination of all of these elements thrusts the band into a very enjoyable middle ground that balances energetic and metallic riffing with some incredibly hooky rhythms and melodies. Tracks like “Pushed Down” have those qualities that could attract a hard rock fan and shift them into a more metallic one by the end of the song.

Tetrarch find themselves in very fertile ground with Unstable. They can use powerful metallic grooves and add ear-worming melodies to them without causing the tracks to become to pop-driven or saccharine. An album that’s bound to turn some heads on both sides of the rock and metal line, and for good reason – monster hooks and riffs are something that everybody can get behind, and Unstable is full of them.