Thursday, 4th May 2017 By Katarina McGinn 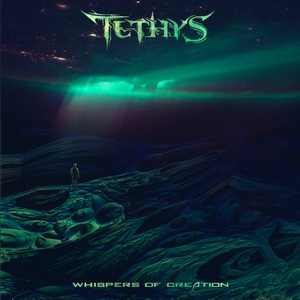 The most important thing separating out best from the rest in tech-influenced death metal in 2017 has to be that of keeping a lively, natural feel. The sterile, cold atmosphere that some bands employ ends up leaving the listener with a severe case of disconnection with the material. Tethys is an up-and-coming act from Colorado that should pique the interest of all who love the more melodic side of tech death as they embody just the right feeling to convey with this type of material.

Labeling the band as just “tech death” may, in fact, be a misnomer with their heavy focus on melodies. No one is going to call them a melodeath band, but they carry the same type of sensibilities into their music as a band like Allegaeon or The Absence. That being hard-hitting yet beautiful leads that are emphasized as much as the intricate riffing and brutal vocals. The closing track, “Astral Transcendence,” has some of the most gorgeous solowork this scribe has heard so far this year. So wicked melodies – check. As far as everything else goes, it’s all about variety. Stevie Boiser runs the extreme metal gamut, encompassing lows/highs/you name it. And when you think they can’t do any else, guitarist Quinn Broderick tosses in a few clean vocals that hit just the right tone and boost the tracks even further. Outside of vocals, frantic riff fireworks and sweeping leads (really, can’t mention them enough) also share time with some massive groove (“Progenitor of Thought”) that is sure to get you moving, even if you’re sitting there by yourself at home.

Whispers of Creation grabs your attention and gives you 20-minutes of dizzying yet memorable death metal that should leave a grin your face by the time it ends. The short run-time means you’ll be highly inclined to repeat the experience as soon as it ends, and the concise and fulfilling nature of each track is one that will grow with each return. An incredibly promising start from Tethys, and a band to keep your eyes on as they continue to grow and progress.