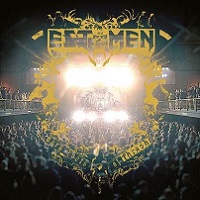 The campaign for Dark Roots of Earth has been a success across the board, with Testament keeping the good vibrations going after 2008’s The Formation of Damnation. And while Testament has been the least polarizing out of all the major thrash acts, they’ve found ways to keep their material interesting, and their fanbase invested, which is where the live DVD Dark Roots of Thrash makes sense. Shot during a February 2013 show in Huntington, NY, the visual presentation is top-flight, well-produced, and as the band keeps stressing, a snapshot of them at their peak. (That point is worth arguing, however.)

Additional footage is kept to a minimum (some backstage action, along the making of the “Native Blood” video), so the live set is the point of focus. The band busts out 18 numbers in all, which is quite the amount for music of this intensity, not counting the respective age of the five members on stage. But with Gene Hoglan pushing the tempo and a bevy of newer cuts to showcase, Testament bangs ’em out, with recent jams of note including “Rise Up,” “Native Blood,” and “True American Hate,” while the urgent gallop of “More Than Meets the Eye” continues to be a live requirement. And Hoglan is semi show-stealer, making it look quite easy from his perch. Big nods to the video crew for shooting the man’s feet, giving the viewer a glimpse at one of metal’s most talented skin-bashers.

Three albums are somewhat conspicuously absent: Souls of Black, Low, and Demonic, which will probably keep set-minders afoul for the time being, yet long-time standbys like “Into the Pit,” “Practice What You Preach” (Alex Skolnick’s shining moment) and “Disciples of the Watch” are to Testament as to “Raining Blood,” “Dead Skin Mask” and “South of Heaven” are to Slayer, meaning, the band would be burned at the stake for not playing them. Even if one would like some more set variety (DR is in this category), Dark Roots of Thrash keeps Testament visible, gliding nicely into their fall run with Lamb of God and Killswitch, and hopefully, a new studio platter by this time next year.