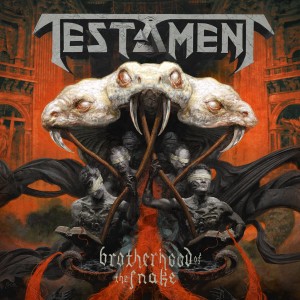 Those lifers in heavy metal know there are peaks and valleys in the popularity of the movement. Sometimes you just need to ride things out to enjoy the highs. Bay Area thrash veterans Testament burst onto the scene through their late 1980’s catalog – The Legacy and The New Order essential to all collections. While most of the 1990’s saw thrash take a backseat to the burgeoning alternative music movement (or heavier death/black bands in the underground), the group plugged along with The Ritual, Low, and the decidedly extreme Demonic. Many musicians as of late cite 1999’s The Gathering as another benchmark from the discography – which brings us to the 2000’s and a new tenth studio album in Brotherhood of the Snake.

Upgrading the bass playing through the exemplary skill set of Steve Di Giorgio, the ten songs have a keen sense of reaching back into the thrash playbook of up-tempo rage and speed riffs while maintaining the crunch and aggression that has been a trademark for their three decade plus existence. The swinging double salvo for “The Pale King” and “Stronghold” assures the legions that Testament isn’t going to stray off the beaten familiar platform anytime soon – Chuck’s deep bellow, the call to arms vocal moments and precise, sharp transitions tight to create those spasmodic, intense body shivers from head to toe. More twin guitar harmonies at a mid-paced groove against tribal-like Gene Hoglan kick work punctuate an early highlight in “Seven Seals”, one of many numbers that feature a look at secret societies, the unknown, and the rituals of ancient times.

Overall the record has great pacing and diversity, recalling a lot of the fury that put the band on the map while adding in those extreme dynamics that show Testament can keep up with the younger musicians. “Centuries of Suffering” and closer “The Number Game” two impressive arrangements in particular, the latter an infusion of the raw, youthful angst of say “Over the Wall” with the finesse and musicianship that makes The Gathering so impressive, the sick riff transition just after 2:01 sure to be a pit favorite. It also helps to have one of the premiere lead guitarists for the metal world in Alex Skolnick to drop jaws and make axe players work harder at their craft as he wields his creative intuition and technical prowess throughout.

Four years between records seems to be the thrash norm these days as global touring opportunities abound – giving the bands more time to refine ideas and allow the best songs to bubble to the top. Brotherhood of the Snake proves Testament deserve their top tier status in the genre.