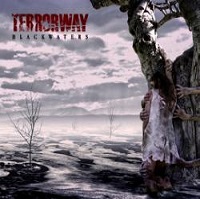 It’s good to see another modern-by-way-Europe metal band pop up; it takes DR back to the time when Mnemic, Raunchy, and Textures were starting to boil, with the trio proceeding to veer off in desirable (Raunchy and especially Textures) and not-so (Mnemic) desirabel directions. Italy’s Terrorway isn’t quite there yet in terms of buzz and critical drool, but on their Blackwaters debut, this Italian four-piece demonstrates an ability to get sharp and futuristic, without leaving melody and hooks at the altar. Thus, it’s a promising start.

Take away the very-thrash (and boring) vocals of Valentino “Sidh” Casarrotti, and Terroway’s approach mingles well with the melody-driven cyber metal. The band doesn’t feel the  need to get too staccato, preferring to let dynamic strains further their cause, like on “In A Swamp,” where a well-toned bass line sets up a riff workout. But it’s mostly about the groove here, with “Wretched,” the title track and the spacious “Keep Walking Silent” having the most impact, the latter of which busts out a little mathcore drumming to keep matters interesting.

Without a direct band to compare themselves to, Terrorway has succeeded in creating an instant identity for themselves. Granted, no one is going to be able to pick them out of a crowded crowd yet, but the detail and no-core happenings of Blackwaters make it a successful debut. And once the band starts to refine their songwriting, they too, can tail off just like the above-mentioned bands.