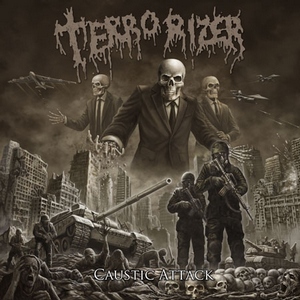 Terrorizer has never had it easy. The classic World Downfall was released back in 1989, before which the band broke up. They reformed in the mid-2000s and released a new album, but again broke up after the death of guitarist Jesse Pintado. The third time has been the charm so far, with a 2012 reformation with Pete Sandoval as the only original member, alongside Sam Molina and Lee Harrison. Caustic Attack is the second album from this iteration, following 2012’s Hordes of Zombies.

On the positive side, Pete Sandoval’s drumming plays a major impact on the record. From the moment that “Turbulence” starts, there’s a frenetic energy at play that takes a lead in the songs. Much of the time, the band is playing at extreme tempos and speed is the driving force, but it’s not entirely rooted in grindcore at this point. More of a death/grind hybrid, which may be a tipping point for those still looking for the mastery of World Downfall, but it never lacks for extremity. Which is where the one gaping hole in Caustic Attack lies. In attempt to make something at speeds nearing fast and faster, there’s just not enough variation. The longer songs (aka 3-4 minuters) really suffer from this one-dimensionality. The riffing may be razor sharp and thrashy, dipping into that late ‘80s/early ‘90s feel, but at the end of a 44-minute release, it’s hard to truly recall a song on its own. The vocals also carry the same sentiment, with intense barks that do suit the music, but don’t offer much diversity.

In the end, Caustic Attack is a competent death metal release, but it fails to stand out. In an attempt to really go for the gusto in extremity, some individuality is going to be lost but everything seems so ‘by the book’ that it’s hard to give the band a full thumbs up.