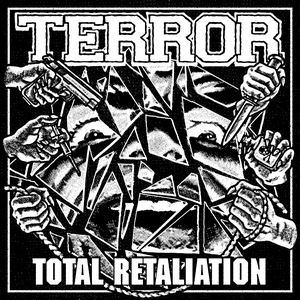 For all of the evolution of hardcore and its spin-offs and blurring with other genres, sometimes it’s nice to just appreciate ‘the good ole days.’ The times when hardcore was ripe with attitude and anger – nothing overtly complicated, just a spitfire of energy. One of the few bands still waving the flag high with pride, Terror are just the ones to deliver an offering such as this.

Embodying the hardcore scene for plenty of years at this point, there’s a certain level of undeniable purity with a Terror record. The blistering metallic edge follows the band, alongside frequent gang vocals and catchy grooves to create the quiescence of what the scene was all about in the ‘90s. Total Retaliation isn’t about re-inventing the playbook, but it does sound as if the band really reached deep into their fury. This album is as about as pissed off as hardcore can get. A brief runtime with 2-3 minute tracks means the band can truly unleash the inner demons, and songs like “One More Enemy,” “Suffer the Edge of the Lies,” and the title track serve up a rollicking good time for those who still get a kick from this sort of thing. The slightly more thrashy grooves of “Spirit of Sacrifice” and the rapping of the “Post Armageddon Interlude” provide a bit of a refresh at the middle of the album, working as an effective palette cleanser before the band begins to rip of the scenery in their usual ways.

A veteran act that’s always stayed true to themselves and their fanbase, Total Retaliation delivers the same driving rage that the hardcore scene thrives on. A straight-up punch in the throat in musical form, it’s good to see the band firing on all cylinders. In the words of Madball, “Hardcore still lives!”