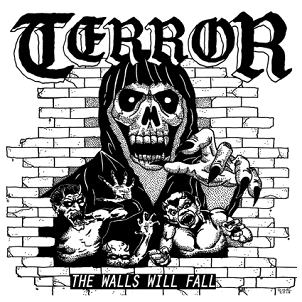 Terror’s consistency is somewhat of a double-edged sword. As it’s commonly known, sound alterations and/or “progression” are frowned upon terms within hardcore. That’s just the way it is. Terror, for all intents and purposes, can never do anything beyond what they’ve been doing since Scott Vogel launched the band in 2002. On the other hand, if you’re looking to iron-stamp a metallic hardcore band who routinely delivers, it’s Terror, who are up to their usual tricks on the five-song The Walls Will Fall EP.

With the band’s standard punk/metal meld in tow, the necessitated agro swing of “Balance the Odds” and in particular, “Kill ‘em Off” find Terror providing getting down in traditional fashion. However, it’s the thrashy title track that brings the most to the table, with mounds of gang vocals and upward riffing. “No Love Lost” and the blazing “Step to You” round out the proceedings.

The Walls Will Fall also marks a new era for Terror on Pure Noise Records. Having previously been on Victory and Century Media Records, the move to a smaller, but up-and-coming label keeps Terror right in the thick of the hardcore underground fray. There’s no place they’d rather be.