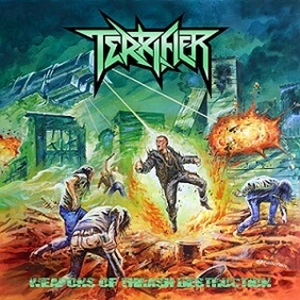 Nifty play on words taking a famous Cold War phrase and flipping it around to describe accurately the contents of Vancouver, Canada’s Terrifier for their second full-length, there’s little worry that we are entering unfamiliar pastures on this one. Active since 2012 (although vocalist Chase Thibodeau and guitarist Rene Wilkinson go back to 2003 in another act Skull Hammer), the quintet lives to smite all false metal and keep old school thrash alive. Easy to see from the pointy band logo and sci-fi/nuclear disaster cover that these nine tracks showcase a set of musicians that mean business, incorporating technical proficiency and relentless adrenaline-fueled tactics to develop a potent cauldron that destroys everything in its path.

When the guitars rivet in that rhythmic, gallop triplet position as the acidic, spitfire vocals stand side by side and the rhythm section dances between racing tempos and transitions ensuring maximum circular slamming, it’s little wonder how “Reanimator” or “Violent Reprisal” won’t be Terrifier favorites for a decade or more to come. The technical abilities of Rene and his axe compatriot Brent Gallant move beyond normal Bay Area tandems and careen into players such as Jeff Waters, Michael Romeo, and even European melodic death/extreme artists – evident on certain riff and lead break sequences for “Nuclear Demolisher” or the 1:40 instrumental “Riders of Doom”. Reference points will align to many of the Bay Area greats like early Metallica, Slayer, and Exodus – but there’s something extra in terms of the intensity and musical chemistry that puts Terrifier in that semi-technical thrash class, the compositions aligning with a late 80’s / early 90’s period when certain bands elevated their game against the burgeoning death movement.

Considering the output of newcomers like Havok and Warbringer plus the strong first quarter offerings from Kreator and Overkill, Weapons of Thrash Destruction could slot in more than adequately when you need some wow factor lead breaks and sizzling riff transitions against old school thrash ethics.