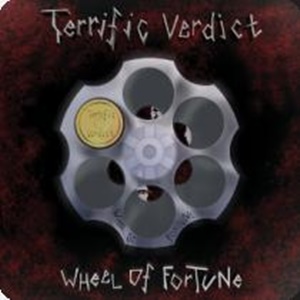 Another act resurrecting decades after their original inception – Finnish thrash band Terrific Verdict were a part of the late 80’s scene, releasing two demos in 1988-89 before separating in 1990. Returning on the scene in 2017, the quartet became a trio and decided to write and record new material instead of resting on nostalgia, thus we have the latest full-length Wheel of Fortune. While attaching bonus tracks of re-recordings from those demo days, the bulk of the record contains songs written over the past two years – still keeping in line with a lot of the Bay Area movements of steamroller riffs, tradeoff vocals with a gang-like edge during the key chorus moments and the necessary ‘mid-tempo’ transitions designed for energetic audience propulsion.

Because of the stripped down membership the songs possess that primal, fierce nature – where the hammer just crushes and the vocals can often mirror that similar crazed atmosphere. Check out “Lazy Jack” or the lurking, ominous groove riff into semi-blast madness that is “Carolina Reaper” for two samples into Terrific Verdict’s diversity. You get the sense that a lot of the guitars and vocals mirror each other – the drumming delivering the dynamic punch to develop distinction between the songs – most effective on “Apprentice” and the Metallica/early Slayer-esque “Son of Satan (SOS)”. Most of these tracks aren’t outstaying their welcome at 3-4 minutes a piece, but the overall trouble in recommendation lies in the substandard musicianship and vocals. Many of these songs have a nursery rhyme style rhythm pattern to the moan/whine-oriented vocal delivery that can be tedious to take in multiple sittings – and the lead breaks leave much to be desired in cohesion, a lot of times just random notes floating in the air without purpose to the song at hand (the title track probably the worst offender in all regards). And don’t get this scribe started on the MS Paint-style band logo…

Maybe those who love anything that has the ‘thrash’ tag attached to it will find something to appreciate about Terrific Verdict, but with Wheel of Fortune the band probably needs a little more seasoning in the rehearsal room and tougher critical ears to come up with better material than this.