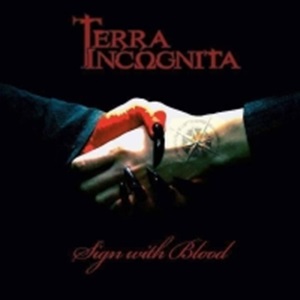 Possibly using the Greek symbol Ω in place of the o in their namesake to differentiate themselves in social media channels (trust me if you plug the name in you’ll get a racy female model through Facebook), Terra IncΩgnita is a quintet from Athens coming from a classic melodic heavy metal platform on this particular EP Sign With Blood. After their 2010 start and a full-length album Barren Land the following year, lineup changes and life events put the brakes on activities for a few years. Armed with a new drummer and rhythm guitarist since 2015, these musicians felt while properly fleshing out a second album it would be best to get some fresh material out to the public.

Many of the rhythms and natural classic hooks/harmony tricks the band employ come from an older power/NWOBHM cloth – names like Iron Maiden, Judas Priest, Iced Earth and Vicious Rumors appear in the choice of riffs and transitions throughout “Conqueror” and sinister title track, the latter featuring the right double bass flash and dash plus keyboard accents for darker hues. Native New Yorker Billy Vass hoists his multi-octave vocal prowess with pride, towering and commanding with supreme conviction, holding out Dickinson/Dio/Halford-esque high notes during “My Emptiness” that passionate lifelong metalheads clamor for – but also has that lower register clarity and grit when necessary during the verses for the follow up “Conqueror”. The four songs aren’t going to dazzle in a fancy, show off way – it’s more of a meat and potatoes approach where all the instrumentation supports for the sake of headbanging hooks, to the point choruses, and effective lead breaks that elevate things to shredding/guitar hero status.

Those who remember the wave of American acts after Queensrÿche first burst onto the scene and put their own spin on things – Lethal, Fifth Angel, Psyco Drama – that’s the mold that Terra IncΩgnita fit in for Sign With Blood. Seeking out Firewind’s Bob Katsionis for production, mixing, and mastering gives the listener a sonically solid product. Probably going to gain more appreciation from the older crowd, but that doesn’t make it any less worthwhile for those who yearn for some classic melodic metal with power.