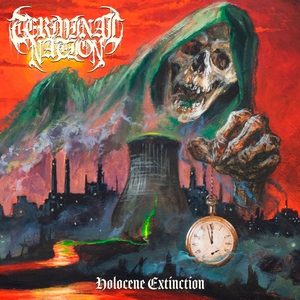 With grindcore and powerviolence in their history, Terminal Nation makes a move into more deathly territory with their latest in Holocene Extinction. The influences of both genres certainly make their presence known, as well as a distinctive hardcore vibe, and it makes their extreme metal quite pissed off and aggressive. The type of pissed off that oozes out the speakers.

No doubt about it, Terminal Nation is angry. Given that angry times call for angry music, it’s a solid time to be releasing an album such as this. The band’s buzzing guitars feel like they blur the line between old school Swedish metal, crust, and hardcore, and it’s an enviable tone. It adds to the venomous energy on blistering tracks like “Thirst to Burn” and “Caskets of the Poor.” A sense of howling chaos overwhelms when the more grinding influences come out, with energetic blasts and chaotic riffs leading the charge on a cut like “Revenge,” which also doles out quite a bit of chuggy, hardcore groove when it slows down. That said, some songs feel a bit too unpolished and seem to finish earlier than necessary. “Leather Envy” uses some clean-ish vocals for a few seconds before quickly ending entirely, and some of the shorter cuts like “Master Plan” and “Arsenic Earth” also feel like they had more to offer and cut to the finish line. While it’s understandable that such an angry and rooted-in-grind release would shoot for shorter long lengths, it feels like some of the potential in these tracks isn’t entirely fulfilled.

For what it delivers in adrenaline and rage, Holocene Extinction is worth a go for those who want a more visceral type of extreme metal that seems to revel in blurring the lines between hardcore, grind, and death metal. While some of the songs could be fleshed out a little more, it still provides a lot of bang for your buck.