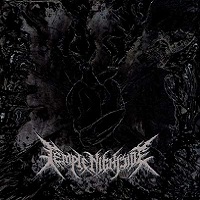 Death metal – regardless of origin – seems to be plunging further into the abyss of late. It’s no longer useful to simply sound raw and mildly retrograde, you have to sound like you tossed your amplifiers down a black hole, snagged the world’s longest extension cord, then plugged in and got going. Granted, it’s not as far-fetched or easy one thinks; some serious tinkering has to be done for albums to sound in this manner, something Australia’s Temple Nightside have wrapped their heads around on their Condemnation debut.

Comprised simply of Basilysk (drums) and IV (vocals, guitars), the pair also happen to be a part of cult black metal outfit Nazxul, one of the various horde-mongers on Moribund Records. So that BM connection plays with favor with the sonic style of Condemnation. Echo-y and buried, one will have to climb through the rumble of in-the-back drums and fuzzed-out guitars to get some semblance of what’s taking place, although the brisk pace set by “Abhorrent They Fall…” seems to be a quality take on necro death and then some.

The ambient number “Pillar of Ancient Death (Commune 2.1)” proffers a segue into the album’s strongest cut, “Dagger of Necromantic Decay (Eater of Hearts),” a warped, bludgeoned outing with bellows from the deep, and a full-on 80’s proto death rattle. It’s here where Temple Nightside is able to realize their wry concoction of extreme metal from the depths. Everything else on Condemnation is something of a push…they might have plunged a bit too far in the end.