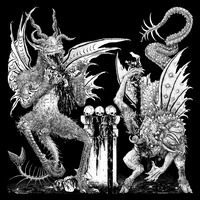 With subterranean death metal seemingly becoming all the rage in the last few years (will it overtake the old school Swedish death metal resurgence at some point?), it takes a bit of ingenuity to separate from the Onward to Golgotha worship club. Enter Temple Desecration, looking to make their mark with a two-song MLP. Fans of Aevangelist and Impetuous Ritual take heed!

Starting things off with some evangelical chanting, it quickly morphs into something darker and more demonic before the initial dirty, sonic blast erupts the band into full speed. “Ghoul Prayer” keeps the creepy and more dangerous sound going throughout the track. The vocals themselves almost sound like demon rasps, and the muddled guitar tone make for an uninviting atmosphere for anyone not into this particular style. While this kind of sloppiness could be conveyed as a weakness, it’s actually one of the key factors that works with Communion Perished. What Temple Desecration does best is work a crushingly evil game of “Red Light, Green Light,” propelling themselves ahead at full throttle only to slow things to a downright monstrous crawl. One side is never neglected for too long, as the band is attuned to finding the nuances within the songs and keeping momentum going.

With such a short time frame, it does beg the question of how Temple Desecration will carry things over to their first full-length. With the strength of Communion Perished, all the band needs to do is maintain the status quo for another 20 minutes or so and we’ll be looking at a monster death metal release in the future.