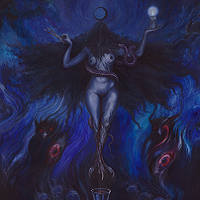 A Chilean/Greece entity playing an utterly primitive, if not bestial form of death metal, Temple Below appears like a part-time project…and sometimes sounds like one, too. Knocking boots in the now overly-familiar template of brazen, but raw extreme death metal, Temple Below doesn’t do a great deal to sell themselves across the four-song The Dark Goddess mini LP, which is the band’s first sonic foray since 2012.

As limited as Temple Below are in their approach, at least they have the necessary sub-production job to get things done. Suitably buried and hampered in the mix, the drums (which on occasion, fall off the meter), are played with such abandon that you almost have to appreciate the amount of “feel” needed to at least partially portray these compositions properly. As such, the old barbaric tremors of “May Worlds Bleed for Her Honour” and “Ave Trivia Ekati” could hitch their wagon to the less-innovative happenings of torchbearers Blasphemy, Hellhammer, and Von.

Perhaps the pan-international slant could be the element that pushes Temple Below through; other than that, they’re not much more than another rote and bland outfit trying their hardest to push metal back into the Stone Age.