Temperance – The Earth Embraces Us All (Scarlet Records) 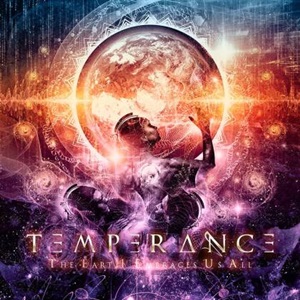 Swiftly establishing a presence in the modern melodic metal world through two previous full-lengths over the past two years, Italy’s Temperance enter an important phase in their career through this third album The Earth Embraces Us All. So it shouldn’t be shocking that the quartet elevate all aspects of songwriting, production, tones, and performances to unleash an explosive cocktail of styles that keep the material sharp, exciting, and dynamically different.

Obvious symphonic strains come through in the keyboard parts of Giulio Capone who also holds down drumming duties – and the fact that Temperance employ a dual male/female vocal combination with guitarist Marco Pastorino ( also with Secret Sphere plus Light & Shade) and singer Chiara Tricarico ensures a wide swath of semi-operatic, power, and heavier textures can come across lyrically and emotionally. The music can move from heads down almost melodic death in “At the Edge of Space” (think Epica here) to straight forward folk/symphonic metal a la current Nightwish for the follow up “Unspoken Words” – the harmonic chorus plus steady, pulsating tempo choice of the latter sure to gain favor from audiences as a sing-a-long treasure. Infectious electronic parts along with Italian sung-lyrics for “Maschere” push that song into more of an Amaranthe meets Lacuna Coil-oriented status, another standout for certain as Chiara reaches for a number of higher range notes that showcase her multi-octave prowess.

When Temperance cross-pollinate sub-genres, the results can be breathtaking as they never lose a sense of metal bite in the proceedings. “Haze” contains everything from a techno-oriented, rhythmic opening verse that gains momentum against another heavier Pastorino riff offering and punishing bass/drum precision work – making for another buzzworthy moment that one can picture lots of smiles and dancing going on in a live setting. Two epics appear in the last quarter of the record – of which the 8:26 “Advice from a Caterpillar” really impressed because of a spirited keyboard workout and the mid-section classical action which includes a guest violinist in Giovanni Lanfranchi (who also appears on opener “A Thousand Places” with saxophone supplementation from Ruben Paganelli).

Simone Mularoni (DGM) handles the mixing and mastering as a seasoned pro – not easy given all the diverse musical styles and layers that occur throughout the 11 songs. In the end, The Earth Embraces Us All will give Temperance a bigger platform to build outward, as they are an exciting, creative, and viable act that take modern melodic metal to new heights through this outstanding release.