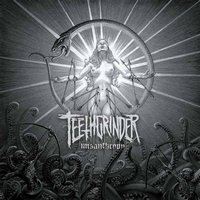 In their own words, Teethgrinder are “giving grindcore a new approach.” Amen to that. Someone has to, and whether this Netherlands-based can or simply cannot, it’s an endeavor worth partaking. The band was formed in 2013 out of two other bands, DrDoom and Greyline, all with the intention of creating something louder and uglier, which generally is the purpose of new bands to begin. (Duh.) After the release of their now sold-out Hellbound EP, they were subsequently snapped up by German indie Lifeforce for the release of their debut full-length, Misanthropy.

Grindcore is certainly the foundation of the band’s sound, although given the considerable influx of other sub-styles, the lines become more blurred. The band almost has too good of a production job to fall right in line with general grind to begin with; the “ping” snare sound is nowhere to be found, replaced by a standard-issue snare that unfortunately recalls the works of the lame-brain deathcore bands of our time. Teethgrinder does toss in a few curveballs, such as the chunky, Cannibal Corpse (circa early 90s) opening groove of “Death of the Individual” and the dissonant heaviness found on “Iron Jaw,” which could pass as a Dillinger Escape Plan if Greg Puciato were singing.

Total blender effect here, and it’s not evident if it has served Teethgrinder well enough. Their riff ideas and song construction are too topsy-turvy for anything to be properly latched on to, meaning, there’s plenty to go around, but not enough of one thing. Misanthropy’s heaviness is well-purposed, though, not to mention the band’s subtle inclusion of voice-overs, which would make most well-traveled grinders nod in approval. Outside of that, Misanthropy is a messy album from a band still feeling things out. (Odd that we’re accusing a grindcore band of being “too messy.”)