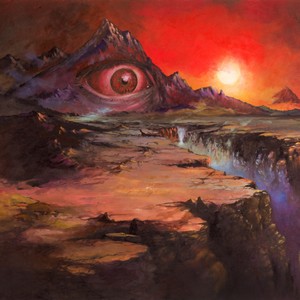 Of the “one-man acts” that tend to permeate the scene at this point, one name that should grab people’s attention is that of Markov Soroka. Initially beginning with Eternium, he’s gone through a number of other projects (Slow, Aureole) and Tchornobog can stand toe and toe with those efforts. If you can rely on one thing with Soroka, it’s that of total and complete immersion into the material.

Much like Eternium, Tchornobog crafts an intricate story that is enjoyable enough to be read on its own. But it’s truly something else when coupled with the music. The feel and atmosphere of Tchornobog is one that the listener can grasp initially but it does reward more with focus and attention to lyrical detail. It is a story after all (supposedly the first chapter of a much larger tale), and the atmosphere around it is also impressive. Cavernous death metal meets doom and black metal, along with some bits of melody to keep your ears attentive. One could draw some parallels to The Ruins of Beverast if you need a sonic starting point. These are long songs (the shortest is 12-minutes) with a number of change-ups over the course of one piece, and it’s almost best to view the album as one continuous piece. There’s some explosive sections, there’s some utterly bleak and evil ones, and some haunting and otherworldly moments as well. It’s the way that these sections are conjured up and placed within that keeps the album from becoming one that starts blending together. It does set a solid stage to tell a story. Plus, the heavier moments sound authentically evil (a tougher job to accomplish than it may seem).

As long as you aren’t intimidated by long song-lengths, Tchornobog is an album that should grab you. An interesting story coupled with sometimes terrifying and sometimes poignant moments, done in a way that never fails to lose interest.