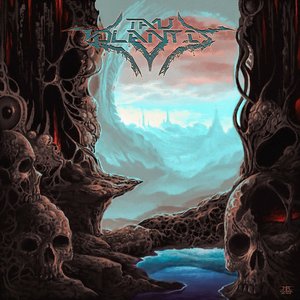 The end of the year hush usually brings about some extended digging into Bandcamp to find some new discoveries. One such band is that of Maryland-based deathcore act Tau Volantis, who launched their first EP last month. While some reel back and cringe with the mention of deathcore, rest assured that Tau Volantis stick firmly to the “death” side of the equation.

The eye-catching Mark Cooper artwork may bring in some who discover the band via Bandcamp, but the fresh act’s take on deathcore will undoubtedly please the ear. The short, 5-song EP leads off with some churning riffs and a somewhat darker atmosphere before “Xenomorphogenesis” officially starts things off with some blasting drums and thick, groovy riffing. The grooves alternate time with faster, and more technically structured ones, which is one place where the band veers off from traditional deathcore. The speed focus is a pleasant one, which provides more varied tempos for the band to attack instead of sputtering about in the mid-tempo groove and slowing down to breakdowns. There are some breakdowns here, of course, but the more dynamic focus on speed allows them to feel more natural and much less obligatory – not to mention the added power. There’s some great melodies and leads to further balance things out (see “Tsathoggua’s Marker” in particular). Vocally, things are about what you’d expect to hear, but by no means does it dampen the affair and there’s plenty of ferocity behind them.

A strong start from Tau Volantis with this EP. By no means are they the only ones parading around more technical and darkly-driven deathcore, but it’s always a treat to find another new band strong enough to follow and see how they progress with more time under their collective belts. This should find some appeal to most of the death metal realm – at least those looking in the modern vicinity.