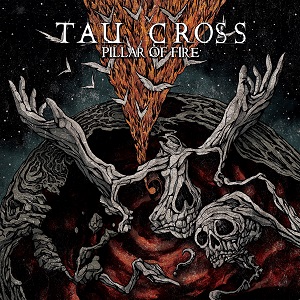 Standing next to this scribe during Voivod’s early 2016 appearance in Pittsburgh, ace drummer Jon Rice (Behemoth, Scorpion Child, Job for a Cowboy, et al) made the comment on how distinctive Michel “Away” Langevin’s drumming is. Far from the world’s most technical drummer, Langevin’s feel and undeniable groove is virtually impossible to replicate. You could probably dump Langevin in a variety of bands and would still be able to detect it’s him drumming. It’s certainly one of the prevailing traits of his side band, Tau Cross, who on their sophomore Pillar of Fire, continue their push through dark punk and metal terrain.

The quick identifiers for Tau Cross’s sound would be Motörhead-on-Killing Joke, the latter providing the dark edge, the first the driving, metal-to-the-grind angle. (Langevin is clearly a disciple of Motörhead’s Phil “Philthy Animal” Taylor.) As such, unflinching, rather pointed cuts like “Raising Golem” and “On the Water” are direct shots, filled with sawed-off punk/metal hybrid riffing and the scathing rasp of vocalist Rob “The Baron” Miller (also of punk-crusters Amebix). “Deep State,” though, gets the nod as the album’s top cut, an immediate, hard-scramble number with riffs all crunched up while Langevin holds it down, steady as ever.

Beyond all this, Tau Cross surfaces as a self-aware, tell-it-like-it-is troupe, unafraid to point out what’s wrong (“The Big House”) while maintaining a balance and direction that supersedes the pedigrees on hand. When thrust up against the band’s 2015 self-titled debut, we’d have to go with Pillar of Fire, primarily for its variance and urgency. Desperate and whacked-out times call for insurgent music. Tau Cross rises to the occasion with Pillar of Fire.