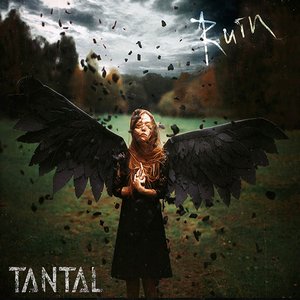 Despite just recently hitting this scribe’s radar (on Bandcamp), Russian act Tantal already had two releases under their belts before Ruin. Interestingly, both albums have a more straight-ahead melodic death metal feel (though they feature both growls and clean female singing), while new album Ruin brings a much wider breadth of influences to the table. As they say, sometimes the third time really is the charm.

It’s clear when listening to the opening track, “Constant Failure,” that Tantal has had some background with melodic death metal. Catchy, galloping riffs with just enough synth backing give it a heavier feel than other bands that tend to linger in this style. In fact, there’s a few growled vocals before this song even comes to a close, as well as some noticeably strong melodies. A bit of modern groove also ups the ‘heavy’ feel, providing a nice balance with vocalist Sofia Raykova’s softer presence (outside of the growls at least). While there’s plenty of this type of riffing to be found on the album, other influences peek out as well. “Torn Inside” implements more modern thrash riffing in the verses, to the point where you could imagine more gruff vocal work still fitting nicely in those sections. “Drained” on the other hand, has a more rock-ish vibe, focusing more on catchy melodies (think Lacuna Coil). A slight gothic hue to the title track gives it a bit more space of its own, though not without some rock influence. Other songs, such as “Low” and “Tears of Yesterday” have a more gentle spin to them – but the key piece that stands out here (other than Raykova’s vocals) is that of the songwriting. There’s a greater depth and intricacy to even the more mellow tracks here that is simply lacking in much of the modern metal approach. There’s some fantastic (and occasionally moving) leads and melodies to discover in each track.

One doesn’t usually think of the modern metal genre for more intricate songwriting, but Tantal are attempting to change that idea with Ruin. The injection of more extreme elements (while still being palatable to those who don’t go for that type of thing) gives the band an edge of the competition, not to mention some more unique ground to stand on.