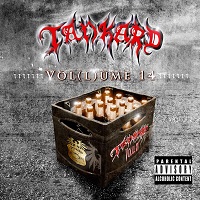 Hey, you try and write 14 albums dedicated to alcohol…not as easy as one would think. For Germany’s Tankard, beer, beer, and more beer has been the topic of choice for their shallow brand of thrash, and it’s enabled them to move into their fourth decade of existence. There’s not a shred of substance here, unless you want to factor in the hops and barley that goes into said alcohol, although modern recording tactics aren’t quite advanced enough to translate actual beer remnants onto tape, but dang it, Tankard have probably debated on it!

On Vol(u)me 14, Tankard open things up with a melodic intro on “Time Warp,” although it serves as the only real melody-driven respite on this 10-song platter. The production is thin and weak, which in this day and age of crystalline production jobs hurts the band, but it doesn’t prevent the catchy-as-all-hell “Rules For Fools” and the expertly-titled “Fat Snatchers (The Hippo Effect)” from being boneheaded, but enjoyable songs. Probably the best jam of the bunch is “Weekend Warriors,” a number that is too irresistible to not sing along, especially because of singer Andreas Geremia’s noticeable accent. Good times they would be.

Frankly, there’s not much beyond face-value with Vol(u)me 14. If the tag “retarded thrash” existed, then Tankard would gladly adopt it. If “sobriety sucks thrash” was also an option, methinks Tankard would latch onto it as well. But when stacked up to the big boys of German thrash (Destruction, Kreator, and Sodom), Tankard appears to be mighty small and puny, which is the opposite of how most people in an inebriated state feel. No wonder their whole career has been dedicated to being smashed…