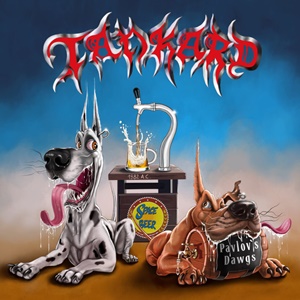 Beer always flows well when taking in any material from German thrash legends Tankard. Celebrating their fortieth birthday as a band, Pavlov’s Dawgs is the eighteenth album and first for latest label Reaper Entertainment. Once again mixing up social commentary lyrically with humorous, sarcastic angles, the music contains the requisite punch, power, and old school ethics that vaulted the band to the Teutonic thrash mountaintop alongside Kreator, Destruction, and Sodom. Over the course of these ten tracks, expect an engaging sound that pulls from classic heavy metal and old school thrash styles, never wavering in its explosive, headbanging ways.

The crunchy rhythms plus Lemmy-like bass charge courtesy of guitarist Andy Gutjahr and bassist Frank Thorwarth pack a sonic wallop that keeps “Ex-Fluencer” and the double kick uplifting “Veins of Terra” retainable anthems through heavy handed hooks plus subtle key transitional notes/melodies that maintain deeper inspection. Quieter bass plucking with an 80’s Metallica feel signals the buildup of the opening title track, where Gerre unleashes his hoarse German-accented vocals in that raw, disparate character that conveys passion for the cause, the instrumental sequences elevating the tempo charge containing circular guitar harmonies as a tip of the cap to Bay Area legends like Metallica. Later in the record dynamic contrasts appear to keep listener engagement on high – “Dark Self Intruder” possessing the requisite fist waving riffs, hooks, plus adventurous, spider-web guitar parts that put Iron Maiden on the map during the 1980’s. Beyond the normal alcohol-fueled track or two that speaks to the spirits such as “Beerbarians”, there is an ode to metal fashion and merchandising for bands with “Metal Cash Machine”, another blistering highlight featuring speedy riffs, tight as nails mid-tempo ‘mosh’ level transitions, and a killer melodic guitar refrain that appears multiple times to tie the composition together.

Staples of the European market, Tankard garners respect stateside but probably never achieved a bigger, headlining-level following due to their lack of proper touring/ distribution over their lengthy career here. Don’t sleep on this record though, as Pavlov’s Dawgs is another example of solid Teutonic thrashing fun, down to the last drop in whatever bottle, mug, or container you choose to drink while headbanging to this.