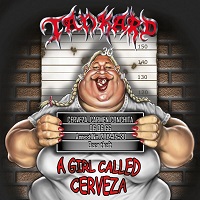 Thirty years with one shtick…now that’s dedication to your original plan. For Germany’s Tankard, their fondness for all things alcohol-related has garnered them as the sole proprietors of the “alcohol metal” tag, something they’ve been able to stretch out across 15 studio albums. It’s rather mind-boggling, actually, but then when you put two-and-two together, it makes sense – alcohol makes the world go ‘round for a lot of metallers. Why not just sing about what’s on everyone’s mind anyway? (For the record, organic gummy bears, not beer was on the mind of this scribe when typing this review.)

Infinitely more musical than their credo would suggest, Tankard’s brand of thrash is part-Euro, part-American, and on A Girl Called Cerveza (their first for Nuclear Blast), there’s an ample amount of feisty, yet mature (musically) songs to be found. Of course, when one takes a glance at songtitles like “Son Of A Fridge,” “The Metal Lady Boy” (with Doro) and “Fandom At Random,” it practically takes the piss out of things by itself. But, the band’s ability to occasionally kick the tires with melody amidst their hellborn thrash ends up being a sort of juxtaposition that works in spades.

The album’s key player is guitarist Andreas Gutjahr, who proves to be equally adept at taking Death Angel-on-Destruction riffs with just enough breathing room for vocalist Andreas Geremia to sing the praises of beer. Opener “Rapid Fire (A Tyrant’s Elegy)” is an instant winner, with a spiraling chorus riff and Geremia’s surprisingly agile vocals doing the bulk of the dirty work, while the lighthearted “Son Of A Fridge” takes a sudden turn into a quasi-ballad territory, only to blossom into full-thrash with a sterling pre-chorus that is embellished with lyrics about being “the top banana, now I’m the just rotten egg.”

A long-time European festival staple, the fact that Tankard could finally make the jump to Nuclear Blast speaks volumes as to how many feel about the band. They’re not exactly the resident clown of metal, but they’re like the town drunk, which means they’re always good for a quick laugh. Or maybe Tankard is on the joke and were smarter than everyone to coin the alcohol metal tag before anyone else did.