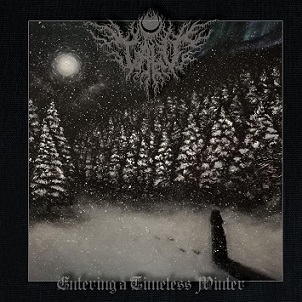 Chamber black metal, not to be confused with atmospheric black metal or anything in the same orbit, is practically formless. Somewhere, buried deep within outrageously hazy guitars, are the drums, which are more like sleep-keepers in the sense they are around so no one takes a dose while recording (or listening). Because of its core tenants, it’s virtually impossible to get chamber black metal to sound even the slightest bit formidable. That’s not the point. So on Talv’s third full-length jaunt Entering a Timeless Winter, it boils down to this: Do you want to listen with intent, or, find something else to do and relegate it to background music?

The project of Italian multi-instrumentalist A., Talv at least gives off the impression they’re not in it to uplift spirits. Song titles, while practically indiscriminate and unnecessary, are fitting: “Dreaming a Funeral in Another Life,” “A Sad Moon Concealed by Pines,” “An Eternal Snowfall Will Come,” and “Sidereal Hypothermia,” with the album closing with a cover of Coldworld’s “Winterreise.” But the point is, Talv’s musical wanderings occasionally feel like the riffs are being played backward, inverted as they are. There’s no beat to be found. A. will occasionally interject with a hoarse, indecipherable yell. This goes on for nearly 44 minutes.

What serves as a full album feels more like the intro or segue music to other, grander black metal albums. Talv’s music is clearly intended to be experienced in some kind of altered or distressed state, making Entering a Timeless Winter an album for sonic masochists, or, for those who truly believe there is such thing as background music.