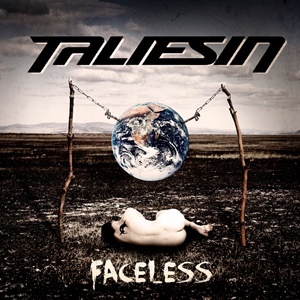 The background story behind Australian progressive metal act Taliesin and the seven-year journey from recordings to release date with Faceless is a fascinating one. Initial sessions occurred in a two-month window from December 2014 to January 2015 – before computers dying, backup hard drives failing, new songs recorded, backup files rediscovered, and the band felt over time that the older songs still deserved to be heard before any current songs get released. A concept record about a serial killer with prosopagnosia (face blindness), the ten tracks musically take on this swirling versatility – intermingling alternative/grunge influences against obvious progressive metal leanings.

A rich vocal tapestry with four members contributing to background vocals support main singer Dave Howe with his steady mid-range comfort zone – a chameleon-like mix of Alice in Chains to Threshold in phrasing, voices, and texture during standout moments for “The Wilderness” and reflective, moody ballad “Turbulence”. Crunchy rhythms against skilled time-signature shifts pull the listener in right away during “Awakened by Darkness”, the clean verses building momentum into driving passages, where you can tell these gentlemen have studied the back catalog of Queensrÿche. Amidst the technical/intricate details these musicians never forget to add in some great hooks and harmonies – “Not Coming Home” brilliant in its King’s X/Alice in Chains-like vocal harmonies that are measured to match the musical textures, a flurry of lead breaks adding to the charm. Bluesy licks against calmer Deep Purple-ish organ strains sets closer “Widower’s Daughter” into a wonderland adventure – guitarists Richard Moseley and Reuben Durham flexing all their axe skills in a tremendous epic ballad format.

To their credit, Taliesin makes this material not seem as old as its original creation period – keeping the proceedings modern and viable to more than just the progressive-minded consumers. There is a special quality to most melodic-oriented bands in any realm of Australia, and with Faceless it should be exciting to see where the newer material may take listeners, as this is a catchy, thoughtful record.