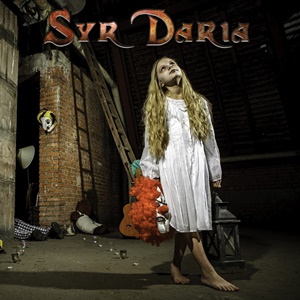 Named after a river in Central Asia, Syr Daria actually come from France – a quintet of musicians that have been together since 2007 and released two previous albums in Circus of Life (2011) and Voices (2015) prior to signing with Sliptrick Records for their latest offering Tears of a Clown. Style-wise the band come from a multi-layered sonic attack with their songwriting and performances – as you’ll hear elements of traditional metal with groove, thrash, and modern aspects circulating within these ten songs. Gaining new bassist Pascal Husser last year brings some fresh blood into this act, and it’s obvious throughout that the band’s focus remains on keeping the material catchy, chock full of hooks and melody lines to cause frequent headbanging and singalong moments.

The bass work receives a prominent boost during key chorus moments for “Virus”, giving the song a bit of a mid-tempo gallop against the focused vocal melodies. Many of the main riffs and tempos take on a traditional metal veneer, emphasizing down to earth grooves and accents where the musicians lock in to sequences and ride out those parts – “Elm Street” with it’s Freddie/nightmare and nursery rhyme-oriented number to vision chorus evidence of this aspect, although there are segments where the drumming and lead breaks takes on an exotic charm. Supplementing the conventional electric instrumentation with specific effects or acoustic/ orchestration elements keeps the record fresh and the listener on their toes – the ballad “Brother” midway through the record a restrained left field effort that allows vocalist Guillaume Hesse a chance to broaden his clean singing through lower and upper registers beyond his natural Hetfield-esque snarl into something more modern rock in conviction. Syr Daria know how to spread out those energy bursts – thrashing about for “Mr. Gray” and then later on for the record engaging in more of a modern, staccato-oriented groove metal burst for “Red Silence”.

Not everything is ideal for the band’s diverse approach – there are occasional lapses in strong musical hooks or specific choruses that aren’t as strong as others (“In the End” an early offender), but the good outweighs the bad for Tears of a Clown. It’s a record that will fly under the radar for its meat and potatoes metal delivery, and contains enough twin guitar harmonies and diverse energy top to bottom to appeal to those into 90’s-period Metallica, Iced Earth circa Matt Barlow-era, and a bit of modern hard rock sprinkled on top.