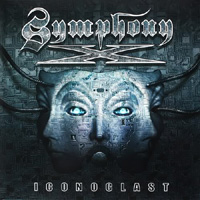 New Jersey’s Symphony X may have spent the first half of their career locked out of becoming a viable touring band due to record label politics, but over the past three studio albums have more than made up for this with crisscrossing jaunts headlining in Europe, Asia, North America and South America. So much so that in the past nine years, Iconoclast will be the third studio release for the band, compared to the 1990’s when The Damnation Game, The Divine Wings of Tragedy, and Twilight in Olympus came out within four years!

Many will say that in this decade, Symphony X are resolute in their ability to intertwine the neo-classical progressive metal sound the long timers have come to grow and love and yet add a bit of staccato-laden heaviness to the proceedings. Starting the album with the 10:51-long title track should prove to the faithful that the quintet haven’t lost any epic swirls or prolonged arrangement proclivity. “The End of Innocence” features a cool bass/drum improv part from Michael Lepond and Jason Rullo in an otherwise obvious highlight track for Russell Allen’s classic rock meets metal range.

Another shorter song that clicks well with these ears is “Bastard of the Machine,” where Michael Pinnella’s fleet of finger keyboard opening and spotlight solo gives way to Michael Romeo’s faster, groove-laden riffs and the rhythmic sense of energy exchange between fan and band, making this one a sure live offering for at least this tour cycle. For some reason though, the second-third of the album just appears to be more of a ‘coasting’ songwriting effort for the band, not really generating any enthusiasm and at some points (such as the mid-tempo yawner “Children of a Faceless God”) makes it a tough sell to listen to from beginning to end.

I think many of the bands nipping at their headlining heels (Pagan’s Mind and Evergrey come to mind) have more of the right look to slowly develop nuances to their sound without merely copying their existing discography. Iconolcast proves Symphony X can play, I just want to hear these gentlemen blow our minds with their neo-classic progressive metal skill-set.