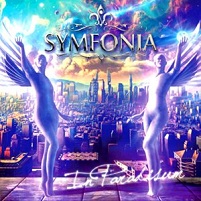 If this were 1997, Symfonia would be the biggest since like…ever. But it’s not, rather, a dreaded “supergroup” consisting of once-viable power metal cast-offs, most notably ex-Stratovarius guitarist Timo Tolkki and former Angra frontman Andre Matos. Rounding the out the lineup are former members of Helloween/Masterplan (drummer Uli Kusch), Stratovarius/Evergrey (bassist Jari Kainulainen) and Sonata Arctica (keyboardist Mikko Harkin). Basically, this is like the Island of Misfit toys, power metal-style.

In Paradisum is essentially a Stratovarius album, just with a dried-out Matos on the microphone. The man’s once stratospheric voice no longer has the same finesse to it, and he’s always been better suited to sing over more flamboyant and ethnic material, as proven by his nearly unbeatable output in Angra’s early days (i.e. “Carolina IV,” “Never Understand”). Matos does have some peppy moments on “Forevermore,” a song that does its best Keeper-era Helloween impression, but Tolkki’s rather straight and unexciting compositions don’t allow Matos to flex his vocal muscle. It’s either that, or he simply can’t do it anymore. Would be a shame – the Brazilian once possessed the mightiest yelp in the Southern Hemisphere.

Tolkki has dipped back into his neo-classical power metal bag of tricks on opener “Fields of Avalon” and the goofy “Santiago,” and yeah, the Finn can still shred, his compositions sound incredibly dated. This was the kind of stuff that everyone was totally enamored with during Strato’s glory days (basically Visions through Infinite), but here, it fails to cut through. The ballad “Pilgrim Road” is boring, while the title track and “I Walk In Neon” (really? who walks in “neon?”) is simply filler.

In Paradisum is going to be a tough sell, for Stratovarius are back on track with Elysium, Angra continues to truck along, and Helloween and Sonata Arctica have long cemented their respective legacies. Whether each group is better with or without the involved parties in Symfonia is unclear, but in what should have been a fierce, testy power metal showcase, turned into a tepid and flat effort.