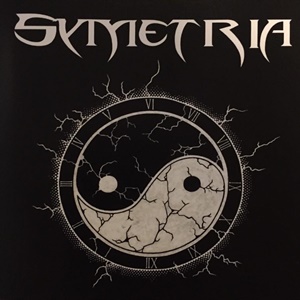 Aiming to bring old school metal back where it belongs, New Jersey band Symetria developed out of the ashes of cover bands, yearning to unleash original material from a love of Metallica, Iron Maiden, and Judas Priest among others. Signing with new upstart Tripsquad Records (headed by former M.O.D. guitarist Tim McMurtie), this self-titled debut contains eight tracks of traditional heavy metal, very focused on addictive anthems and solid grooves in mid-tempo arrangements to develop down to earth material ready for headbanging.

The placement of stop/start elements where say the guitar riff or harmonies shine would be the biggest asset for Symetria in terms of appeal – James Soto and Kevin Cust as axe wielders filling the landscape brilliantly with those torch-bearing passages and similar lead breaks that raise eyebrows and fists. Check out opener “Wakening” or Priest-oriented “Time” for the versatile effort and twin execution. The co-production team of Eric Rachel and label owner Tim ensure proper tones and sonic punch, thankfully gracing drummer Blair Smith with a natural snare snap and allowing bassist Fernando Carrera to have equal prominence in spots to up the harmony abilities during the instrumental passages of “Too Late”. You can of course pick up on numerous reference points for 80’s classic acts like Metallica, Iron Maiden, and Judas Priest – where the band differ though is the vocal delivery of Vince Santonastaso. His semi-talking, semi-singing penchant comes from more of a melodic hard rock or Southern rock slant – which works in certain pockets of “Flying High”, but appears a bit stunted and awkward during the modern tinges of “Stomp” (the slightly repetitive chorus especially) or rapping section of “Symetria”. There are spots where you just wish he would rear back and let loose this high octane scream or higher note to shake things up a bit – as it could be a deterrent to attain long-term appeal for the band.

In the end, Symetria have established a decent debut to learn and grow upon, as these musicians get more live seasoning and gel together on the writing front carving out their own take on the old school template.