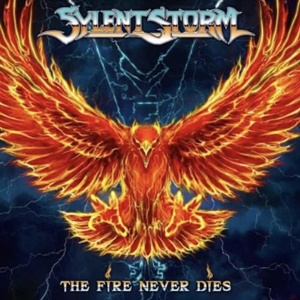 Overhauling the lineup that recorded their 2018 self-titled EP, Sylent Storm return for their full-length debut in The Fire Never Dies. Vocalist/drummer Jym Harris dropped his kit duties to remain as the singer – while the newer members include guitarist Michael Ian Brisbane, bassist Mike Pugh, and drummer Ray Kilmon. Never fear though, the traditional metal influences from the early to mid-80’s still shine through within these twelve tracks – which include two short instrumentals plus ten regular songs that prove bands like Lizzy Borden, Leatherwolf, Fifth Angel and even the early Dokken years still have musicians abuzz to produce stirring, catchy anthems for a new generation to treasure.

Cultural/triumphant chords and a complimentary metal tempo underpinning makes “Wrath of the Blade” the first standout – Jym hitting those siren bird call notes while Michael’s guitar play mesmerizes with all the proper twin harmony accents to build out the hooks for fist pumping, audience hair windmill madness in mid-tempo madness. Building out the key opening sequences into alluring melodies, “Shadow in the Dark” has those early Dokken trademarks, along with a bit of Queensrÿche for good measure between the soothing background vocal harmonies and energetic fills from Ray Kilmon, plus an interesting bass solo from Mike Pugh that adds a dynamic twist to the normal formula. Three of the previous EP songs receive another go here – “Patriots of Metal” in particular gaining a bit more girth due to the wider scope of vocal effects and fiery mechanics from Michael, using a bit more of his tool box of wah-wah pedals and emotive to shred athletics at his hands and fingers. The acoustic guitar strumming within the ballad “Sleeping in the Rain” showcases the softer side of Sylent Storm, and hopefully will be an area always under consideration for the pacing, emotion, and left-field melodies which come more from an older Jethro Tull/Yes perspective make this an intriguing second-half favorite. The only downer is the lower register production values – still improving, but there is a little aural distance factor (probably budget related) that hopefully can get stronger with follow-up releases.

Those who believe traditional metal and its offshoots are not worth looking into for the current crop of bands, you need to really reassess that status as artists like Eternal Champion, Night Demon, and Sylent Storm wield axes of steel and might. 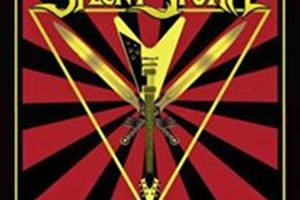