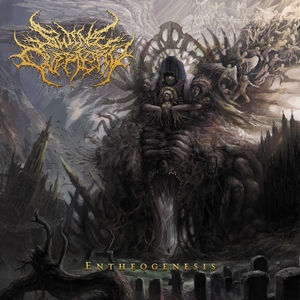 We sometimes talk about how there’s no more “good” names left in metal, but Swine Overlord is a more recently formed band (2012), and for brutal death metal, it’s a pretty creative and interesting name. Coming off of a strong release in the form of 2014’s Parables of Umbral Transcendence, Swine Overlord have returned for their second full-length, which sees some added growth (and some fantastic cover art).

Where the band’s first release saw some slamming death metal that incorporated progressive slants, Entheogenesis full-on embraces this notion. There’s a darkened atmosphere, which occasionally slips in more progressive elements to an otherwise slam-worthy affair. The way that they mix in these elements makes the abrasive death metal hit just a little bit harder. For instance, the darkened and clean opening of “Altars of a Putrid Resurrection” builds atmosphere before taking off into blistering groove and blasts. But the progressive side of the band isn’t limited to atmosphere, as some of the riffing of “Procreating the Offspring of Gods” or starkly melodic leads of “Invoking an Obsidian Liturgy” will give evidence to. But first and foremost, Swine Overlord is brutal and heavy – the band knows where their identity lies and pummeling riffs are easily found, like the grooves of “(I)conoclasm,” alongside the nicely varied growls/screams that one would expect from the genre.

Tying together devastating slams with a more progressive riff structure, Entheogenesis is more than your average brutal death metal assault. The endgame of assaulting the senses might be the same, but the intelligence level of the musicianship will ensure you don’t mistake one song for another. Pummeling, yet cerebral.