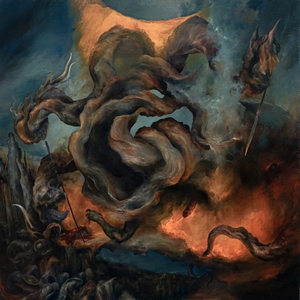 As filthy and ominous as the cover art would lead you to believe, Swampbeast’s full-length debut, coming off of just a demo and split release prior, is a monstrous sort. A swirling melting pot of death metal, doom, and black metal influences, the murkiness is palpable from the first blistering moments of the album to its lumbering finale.

As already referenced before, the sound of Swampbeast is quite fitting to the band name. It’s oozing and bubbling with varied extreme metal influences and has plenty of bite to it. From raging, buzzsaw death metal as “Orcs Anvil” rips its way across the brisk timeline, with bits of black metal coming up from the depths to give it an extra padding of urgency, to more sludgy and doomy dirges that conjure up an even more evil vibe to them, such as “1000 Years of Pestilence,” there’s a constant thick consistency to their sound that keeps it uniform in execution. The varied tempos and elements don’t just toss them into the ‘Incantation-worship’ corner either. They imbue all of these dark and boggy elements without falling prey to any quick name comparisons. Instead, there’s just a dark and menacing feeling that the band provides that stands as timeless extremity. The fiery and caustic side of the band, like “Trudging Through Oblivion” hits hard and fast, sweeping you up into a maelstrom of riffs and growls, and then they slowly drown you into quicksand with trudging and lumbering cuts like “Spell of Decay.” The combination is really what sells the act.

Seven Evils Spawned of Seven Heads provides a caustic and oppressive take on death metal, combined with some additional elements for good measure. This slimy, eerie extreme metal has been catching on more in recent years, and Swampbeast executes it with manic delight. This will win the extreme crowd over with ease.