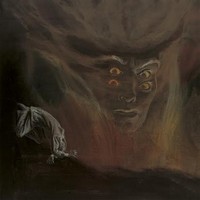 Sometimes awesome and sometimes frustrating, Lunarterial is a peculiar piece of work. Chaotic and at times dissonant death metal freely intermingling with often lengthy doom passages, it’s death doom in a manner that goes beyond the norm and really, when it works, it really hits hard. Not all is well beneath the menacing veneer of the fantastic cover, however, as there are times when the tracks just meander without meaningful resolution, such as in the absolutely mammoth 26 minute closer “Libations” (more on that later), which takes up about half of the album’s total running time.

The death metal contained within isn’t too far removed from the cavernous sounding ‘abyssal’ style that’s trending in some of the darker regions of the scene, not unlike Grave Miasma or Mitochondrion. Densely atmospheric passages of pummeling are accompanied by extended indulgences into the calm, either as respite from the ongoing blunt-force trauma or as a setup to the horrors that await, as in “Black Phlegm’. Mid-album standout “Black Aura” are where the two sides of the sound coin really come together at their best, the track remaining engaging across the whole of its ten and a half minute expanse (admittedly, to my initial surprise).

To return to the closer though, there are times when an idea can be stretched a bit much and in “Libations” this idea is not only stretched, but stretched about four times too far. Peaks and acidic valleys abound across its gratuitous expanse, atmosphere giving way to searing and dissonant solo work giving way to violent slogs at the hands of beings unknowable. Somewhere around the 15 minute mark , however, it becomes easy to become disengaged as the passages continue to flow forth as the many faces of the band continue to surface and exalt. A track that’s commendable for its tenaciousness and audacity but nevertheless perhaps in need of some slimming for the most meaningful impact.

For genre fans Lunarterial is an easy recommendation, holding all and more of the staples that make an album a fun indulgence, especially for the experimentally inclined.