Swallow the Sun – Emerald Forest And the Blackbird (Spinefarm Records) 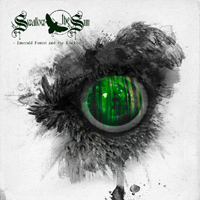 Swallow the Sun’s gradual drift away from their strict melodic doom metal roots started with 2009’s excellent New Moon, an album that married the band’s deep-rooted death metal affinity with airy, cleanly-sung quasi-prog metal escapades. To further the notion, the Finns are hardly the compact, dig-your-grave-early type of band they were when they started, and if Emerald Forest and the Blackbird proves anything, it’s that Swallow the Sun are close to becoming too epic for their own good.

Those familiar with the Finns’ back catalog should be able to make an instant connection between Emerald Forest and the 2008 Plague of the Butterflies EP. Said EP contained a 35-minute title track that was akin to several songs being crammed into one, which is what Emerald Forest fees like. Save for the outstanding “Hate, Lead the Way,” the album sort of hangs there, rarely hitting upon those sordid touchy-feely “down” moments. For lack of a better term, it feels too big for its britches, as the back-half of the album has two songs that chime in over eight minutes.

Compositionally-speaking, primary songwriter Juho Raivio seems to be too enamored with listless, non-engaging melodies, most of which lollygag along with little impetus to do more (see: “Cathedral Walls,” “Hearts Wide Shut”). The death-roar of singer Mikko Kotamäki is overshadowed by his burgeoning clean vocals, a trait the man has clearly improved upon from Ghosts of Loss and Hope days, making “The Cut Is the Deepest” a worthy cut.

Without trying to pile it on too much, Emerald Forest and the Blackbird is too expansive for a band that once reveled in having two or three primary ideas per song (see 2003’s genius The Mourning Never Came). While no one would balk at the idea of wanting to grow out of the restrictive doom metal template, Swallow the Sun were simply unable to find the jarring doom stride they did on their previous four albums. Disappointing? Yes, absolutely. The harbinger for future poor albums? Probably not. Swallow the Sun are too good for a plunge into irrelevance.